I cannot believe baby Martin is finally here!! and its a …. GIRL!!! Over half of you guys voted girl, and you were right!! How did you know!? :p

We named our sweet princess Abigail Irene, and she is 9lbs 8oz of just perfection!! Her birth story is a little crazy, so i figured i would post a blog about it since so many people are asking us how the homebirth went! Here it goes!

On Oct 30th i was having mild contractions on and off, 15-30 mins apart, i figured active labor was only a few days away! Abigail was postieror causing me a lot of back pain, so around 130am on the 31st i woke up in pain and decidd to do every spinning baby technique i could find to flip her! I was up for 2 hours!! Then on Friday morning, Oct 31st i woke up feeling a little sick, and just not “normal” My contractions were still only 15 mins apart, however i could not really walk or talk through them like i had been before, so i knew something was happening! I called my husband to come home around 1030 because i needed some help with our Owen and my contractions were steadily 15 minutes apart. I know the rule of thumb is go to the hospital/call the midwife when they are 5 minutes apart, and i wasnt there yet so i just took it easy for the day and bounced on my big birthing ball! My contractions turned into 30 mins apart give or take by the evening, so that night we took owen to the harvest festival at our church to get candy and play games, we were there an hour and a half and i had 3 really painful contractions while we were there..all far apart! When we got home i just bounced on my ball some more and we rented a movie, during a contraction i really needed hubbys help through them, to keep me relaxed and breathing correctly, they were still 15 minutes apart. we got into bed around midnight and after i fell asleep i was woken up by a contraction, i started the timer and WOW it was the most painful one i had felt yet! when it was over i fell asleep again, woke up with a contraction and it was even worse, i was literally shaking through it, and it was exactly 10 minutes apart from the last one, i had two more like that laying in bed, 10 minutes apart, so we got out of bed and hubby helped me through them again, they were so intense that i was shaking through them and i just could not relax!! but they were so sporadic, 10 minutes apart, 7 minutes apart, one of them was 4 minutes apart, then the next one was like 13 minutes apart…i went ahead and told dan to call the midwife just because of how painful they were! He called her and she told him to set up the birth pool, while he was setting it up i was having some serious back pain, so i got on my hands and knees and used my ball for support, i had my contraction timer and i could feel one coming, so i pushed the “start” button, it was 213AM, as soon as i pushed it my water broke!! Dan called the midwife and told her that my water had broke, and in the background i was screaming “The head is coming!!” LOL! She did not waste any time trying to come out, thats for sure!! I screamed so loud trying to push her out that i am suprised Owen didnt wake up! My husband was freaking out just a little, since nobody was there to help us birth her, but the midwife was so calm and told dan exactly what to do, he went ahead and called 911 just to be safe, however they were SO unhelpful and gave no advice at all, they were more concerned about my and my age, ect. so he just threw his phone and kept talking to the midwife on my phone and at 217AM she made her grand entrance!! That is 4 minutes from when my last contraction started and my water broke 4 minutes of pushing!! when she was out i felt so relieved, she cried right away, she came out in a perfect position, i held her and she was pink and looking around, hubby helped me get in bed and as soon as i got in bed EMS arrived, and dan sent them away LOL! The midwife showed up a few minutes later and everything looked perfect, we had such a high and adrenaline rush, we couldnt believe what just happened! She nursed right away and was calm the entire time the midwives were here checking us out and cleaning up. She was 9lbs 8oz and 21.5 inches long, black hair just like her brother when he was born. She is just absolutely perfect!! I cannot thank our midwives enough for keeping Dan calm on the phone and instructing him on exactly what to do and what to look for/listen for, Id say he did a pretty good job bringing our daughter into the world :p  The next morning [or the same morning actually] when owen woke up, he was sooo welcoming with her, he said “mommy..the baby come out..your tummy is squishy now!” thanks kid! 🙂 he hugged and kissed her right away!

So while technically the homebirth didnt go as planned, i think it went better! haha! No matter homebirth or hospital birth, we wouldnt have made it to the hospital, and the midwives wouldnt have been able to make it to our house, i feel like i skipped right over hard labor and went into the transition stage!! Here are a few pictures from after she was born 🙂 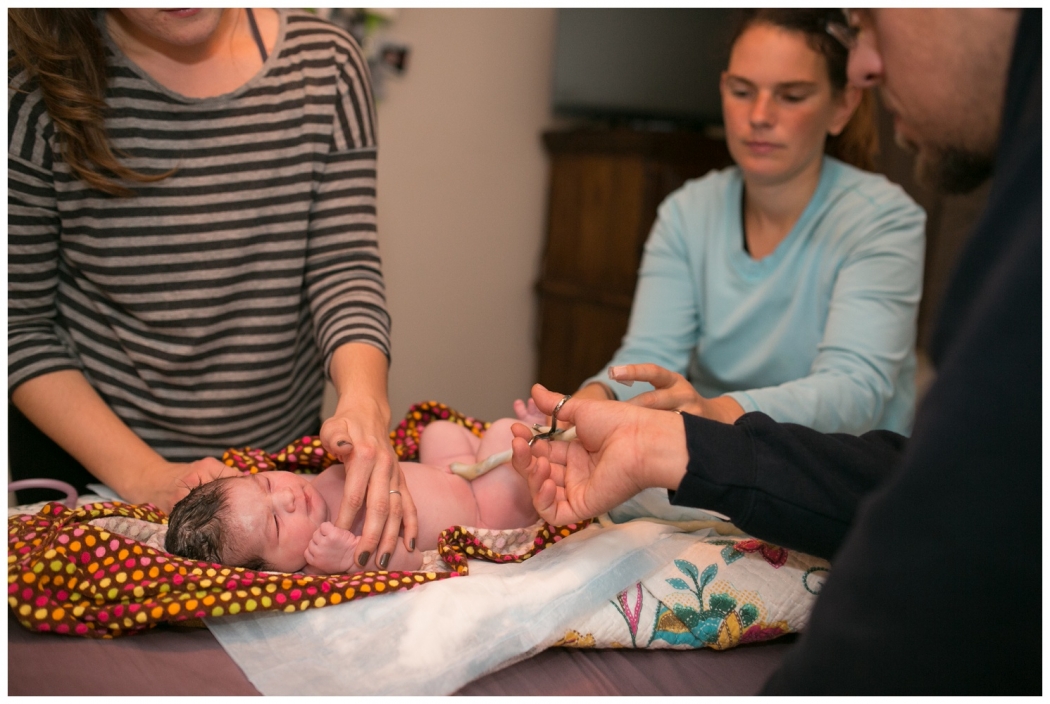 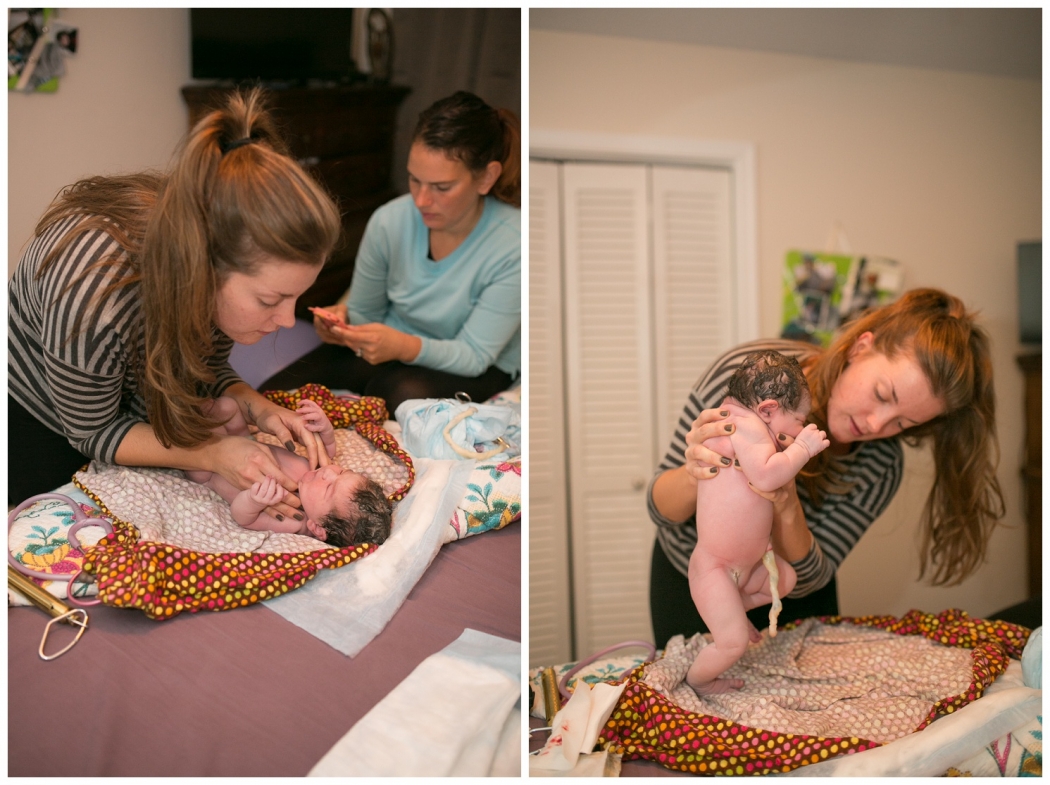 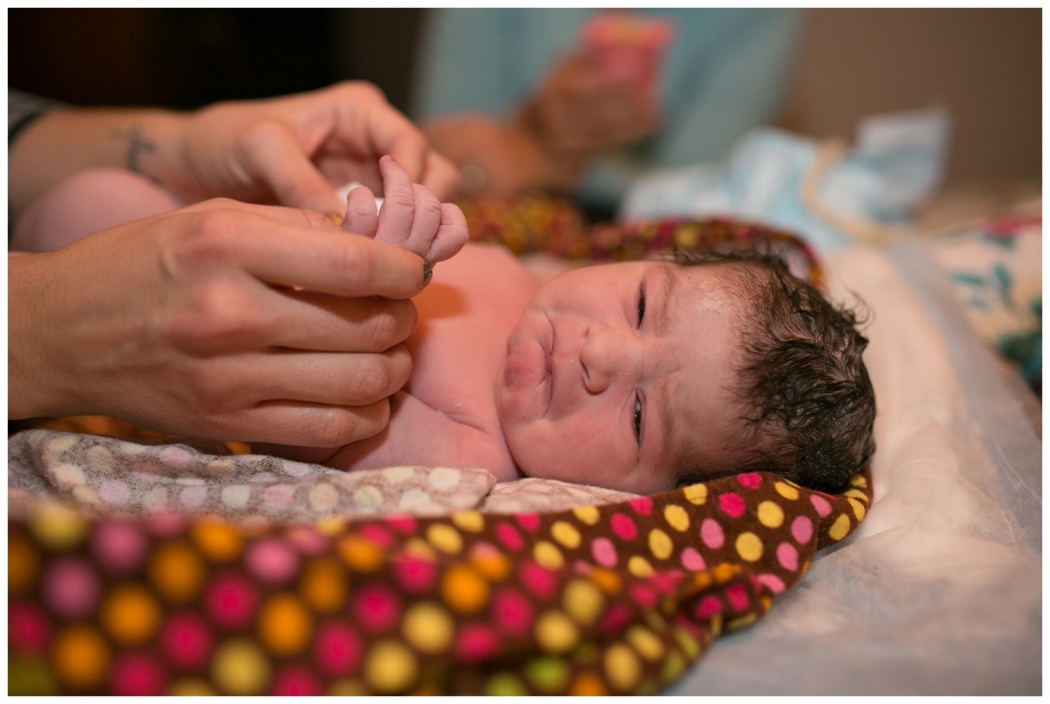